Dan, Charlie, Shane and myself packed ourselves into Dan’s truck and loaded up Shane’s super convenient pull behind trailer with two kayaks, a solo canoe and a gorgeous Stand Up Paddleboard made by Shane himself – Timber Longboard Co.

We headed down I-44, made a left on Hwy 65 at Springfield, passed Branson into the heart of the Ozark Mountains to Harrison, AR – about 4.5 hours total. After a great BBQ dinner, we drove the scenic route 43 towards Ponca, then into the Steel Creek campsite. We set up camp as the sun was setting and settled in for a cold night. 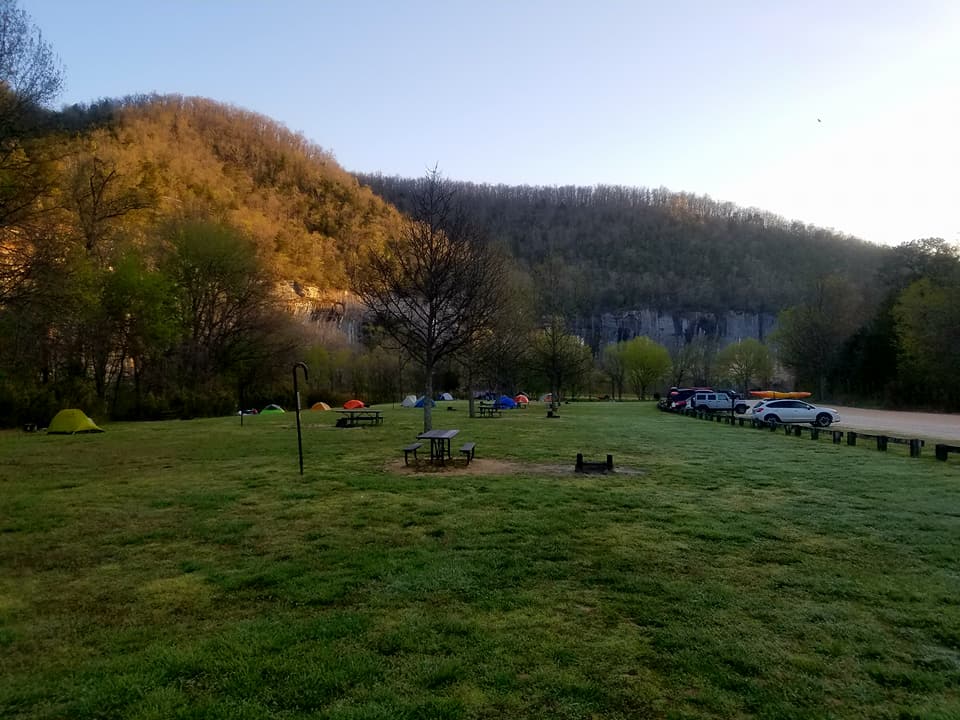 We woke up to ice on the grass and quickly got some coffee and breakfast going. After packing up and consulting with some park rangers, we put in the Buffalo River at Steel Creek. Me in my 16′ Eddyline Nighthawk, Dan in his beater kayak and Shane on his SUP. We paddled under the bluffs a half mile downriver to the boat put in to meet Charlie. After slamming his fin on a rock causing minor damage, Shane determined the river was too shallow to continue on the SUP, so unhooked Charlie’s canoe and reluctantly dropped her in the river. 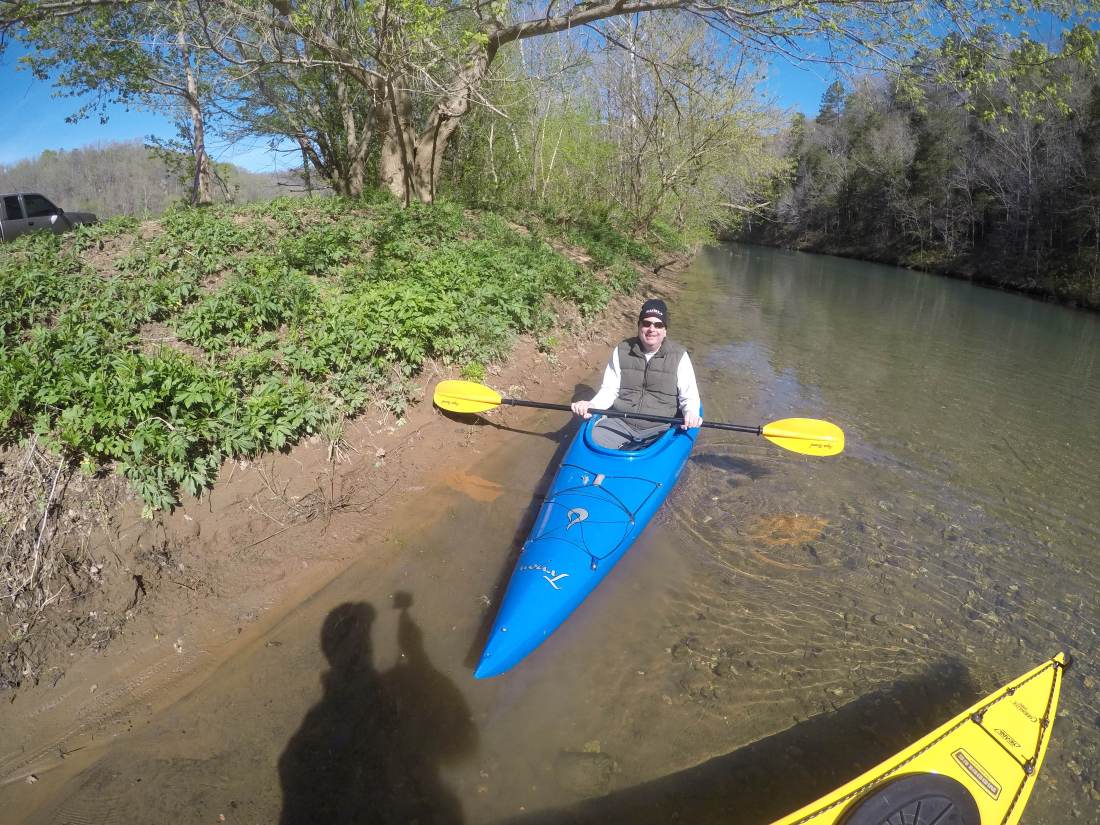 The plan was to paddle at least to Erbie (13.7), Ozark (19.1) if we were feeling ambitious. We planned a liesurely pace, and also wanted to hike up to the falls at Hemmed In Hollow.

Immediately we came upon massive bluffs, 200ft up to 600ft, easily higher than any bluffs encountered in Missouri. The water was a light shade of green and was crystal clear and very cold. 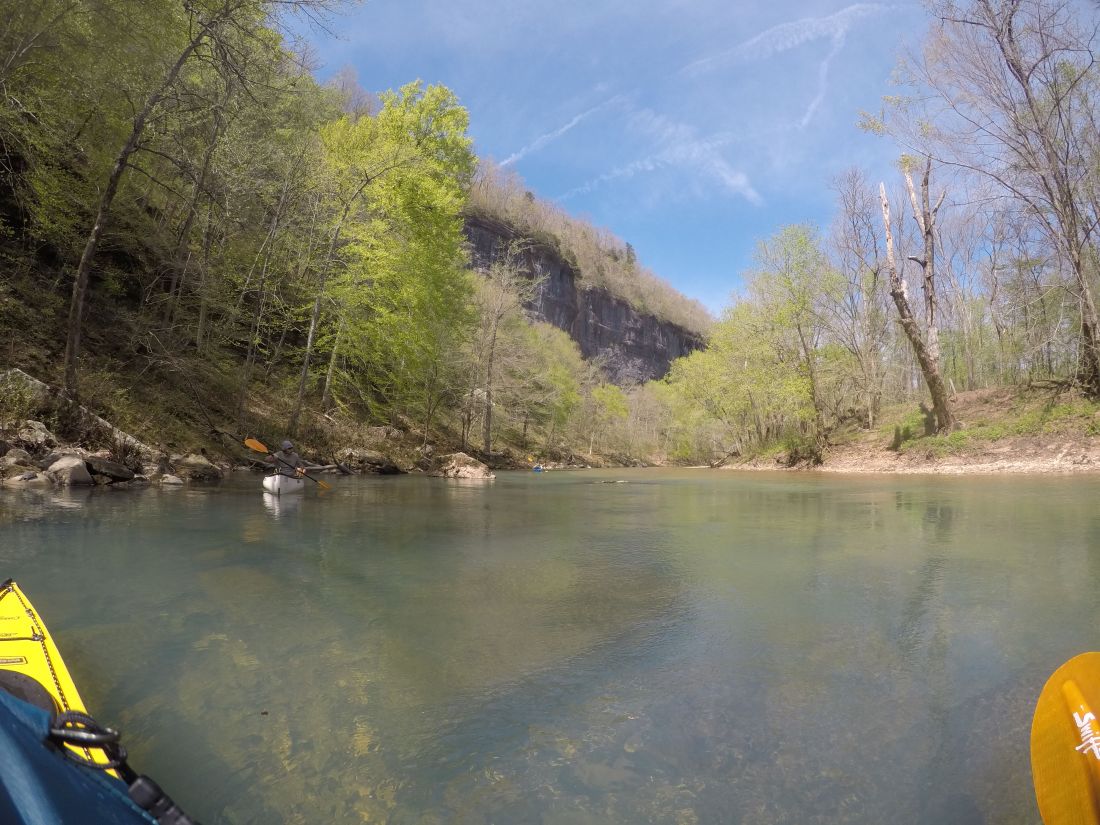 The Buffalo River in this stretch, in addition to massive bluffs above the windy bends in the river, consists of slow water pools connected by a set of fast rapids varying in difficulty. Most rapids were deep enough to allow passage without touching rocks, but there was an occasional scrape on the bottom of the boat or a rogue wave flowing into the non-skirted hatch.

After about 5 miles, we saw a small wooden sign with “Falls” carved into it. We beached the boats and hiked the easy half mile trail up the hollow to reach Hemmed In Hollow. There were a few people who had hiked the 2.4 miles in from Compton Trailhead. There was a small stream flowing over the cliff and almost disappearing in the breeze before it hit the ground. 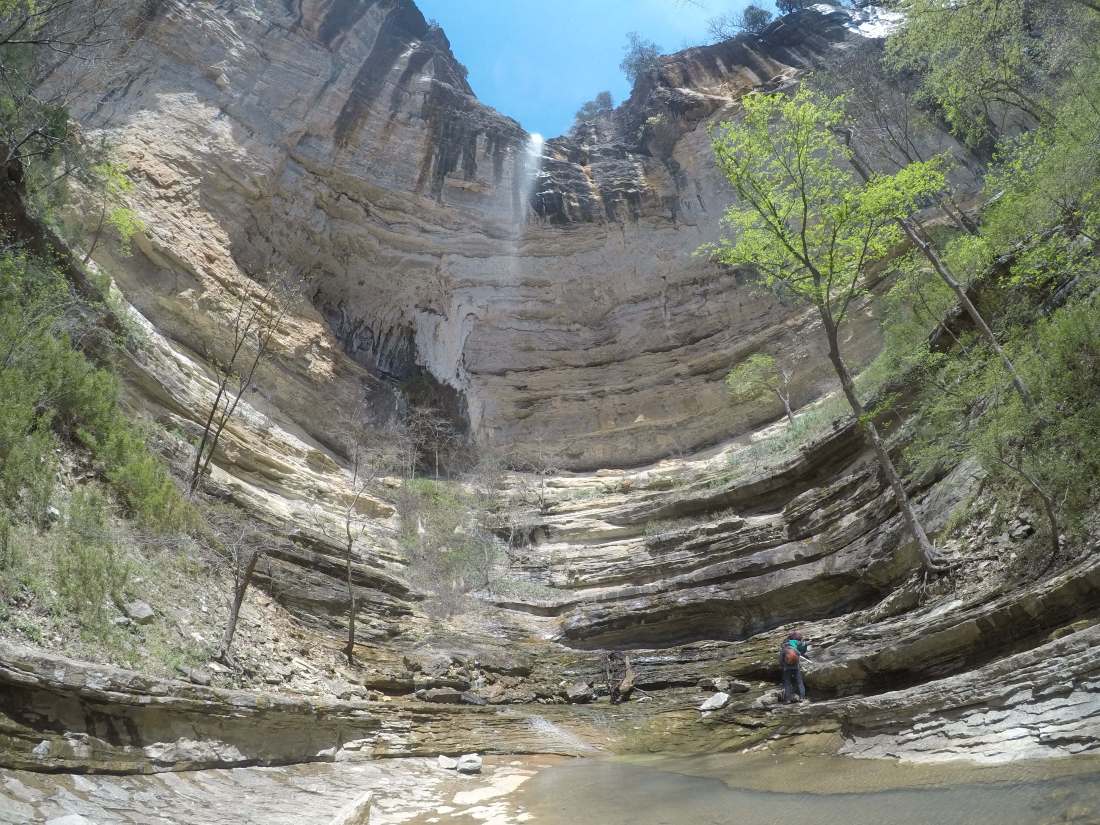 Back to the boats for a quick snack for lunch and a cold libation, then back on the river. We stopped briefly at Kyle’s landing in mid-afternoon, before the last stretch to Erbie, but not before a pit stop to climb a small bluff and jump into an unusually deep green pool. 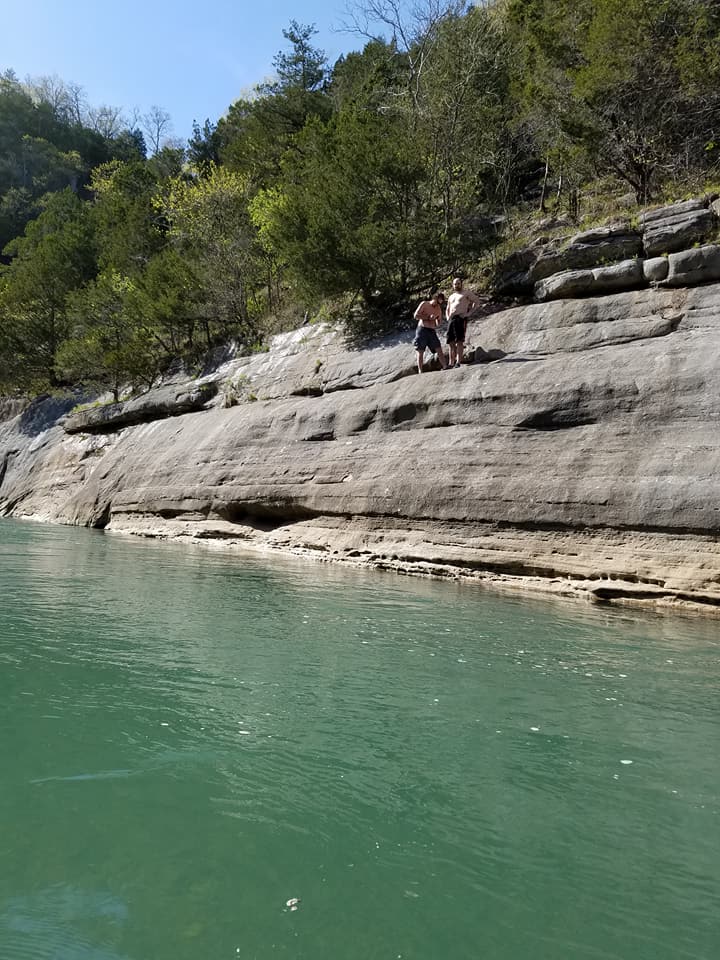 We got to Erbie and met our faithful shuttler Charlie, loaded up the boats and found a nice (free) campsite nearby. 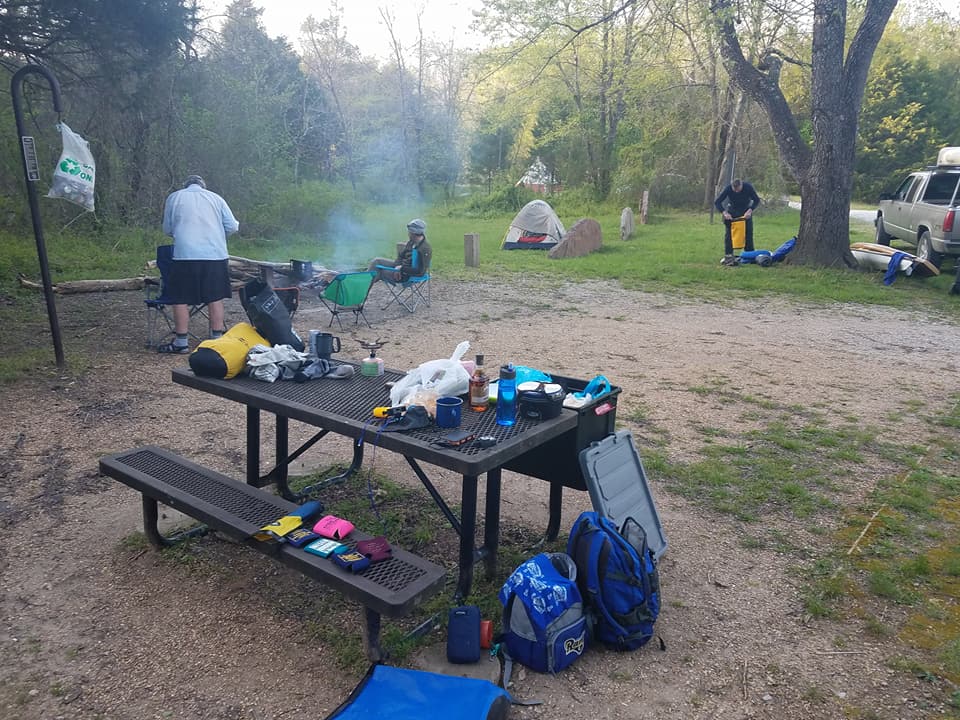 Back on the river the next morning, it was a much warmer morning with a beautiful sun. The plan for today was Erbie to Hasty, 14.5 miles. The bluffs were not as majestic in this stretch, but the water was still amazingly clear and tinged green. We meant to meet Charlie at Ozark for a quick resupply, but after waiting for a bit and not seeing him, we got back on the water and made our way down to Pruitt. Picking up some much needed cell reception, we noticed a pretty big rainstorm approaching. Charlie loaded us up and Shane was ecstatic to swap out the canoe for his SUP, as the river had deepened somewhat. We went ahead and paddled the last 7 miles to Hasty under the gathering clouds and slightly cooler temperatures. 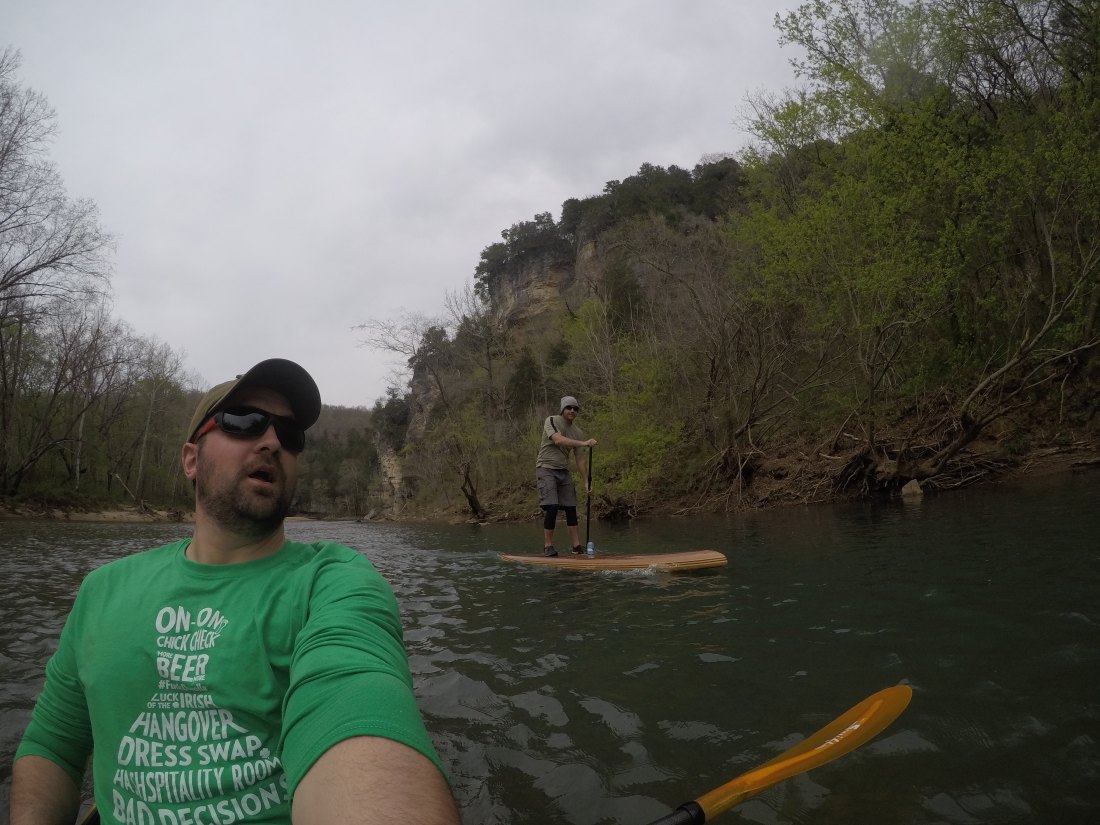 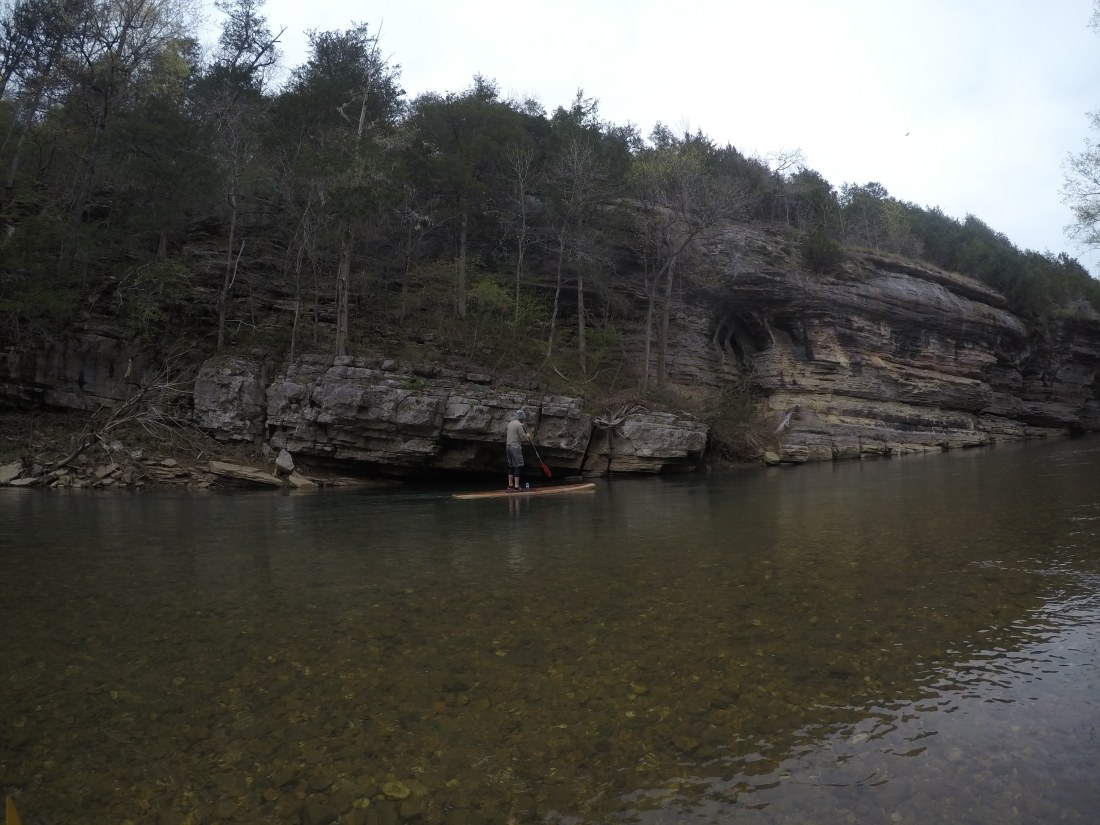 Despite some furious back paddling when I saw the upcoming obstruction, I managed to pin my kayak on a large root ball that was taking up a good portion of a fastwater stretch of the river about a mile up from Hasty. I only lost a few cans and coozies, and managed to retrieve most of what I lost after righting the ship. We were ready to call it a day when we met Charlie at Hasty as it had just started to drizzle. We loaded up and drove to the Carver takeout campground. We quickly set up our camp, but luckily, the heavy rain held off most of the night while we cooked camp dinner and built a big fire.

The heavy rain started about 5 am, but was mostly done by the time we broke camp around 9. We took a pit stop for a hearty breakfast back in Harrison before hitting the road back to St. Louis.

I highly recommend this trip for a two, three or four day adventure. There are sandbars galore to camp on or more developed campsites if you’re into that, ample wood for fire burning and not a whole lot of people. Your ability to paddle this river is entirely dependent on water levels – I found this site to be very helpful in keeping tabs on conditions. You also need to keep an eye on the weather forecast, as heavy rains can raise water levels quickly and dangerously. Generally the upper stretches of the Buffalo can only be paddled during Spring. Lower stretches of the river are less scenic, but able to be paddled in other times of the year.