A completely free birthday eve Saturday greeted me yesterday so I tossed around familiar bodies of water to hit. A Washington, MO based co-worker has always told me about his float trips on the Bourbeuse River and a quick Google map search revealed an easily accessible river access just off Hwy 44 near Union, MO – Uhlemeyer Access.

I loaded my Eddyline Nighthawk 16′ up on the car and headed out. I was tempted to take one of my new to me beater kayaks I just got last weekend, but although shorter, their weight is somewhat prohibitive for a single person trying to load them on the car.

I dropped in at Uhlemeyer (river mile 102.3) around noon and headed upstream. Quickly passing under the 44/50/66 bridges, the water was calm and glassy, with almost no current to paddle against. I passed a kayak fisherman and a john boat with guys busy baiting hooks. A little further upstream, a flotilla of short kayaks sat on a sandbar while a family group swam in the water nearby. A cool cloudy day produced a little bit of drizzle for about 30 minutes, but then the sun came out for the remainder of the paddle. Continuing upstream, I passed under a train bridge, with quite a few river shacks on both sides of the river.

I had Dan Carlin’s Hardcore History podcast going – Supernova in the East I – about Japan’s historical rise and cultural lead up to WW2. Amazingly interesting soundtrack to accompany the beautiful sights on the river. I didn’t really have a turnaround point in mind, but a little further up, Google maps indicated the river running right behind a Wal-Mart, so that contrast of the natural and the consumerist acted as my unofficial goal. After a leisurely three hours and multiple points of having to get out and drag the boat due to shallow riffles, I spotted a big concrete structure stretching across the river. Getting close, it looked like an old mill and associated dam. This is Guth’s Mill Dam (river mile 96.8). I opted not to portage, spent a few minutes climbing up on the dam and checking things out. Wal-Mart-upon-Bourbeuse would have to wait for another day.

The paddle back downstream went fairly quickly and I was back to Uhlemeyer by 5pm. Overall, the Bourbeuse at this stage was pretty shallow, having had to drag the boat in a few spots. But this stretch is perfect for an easy day out on a surprisingly clean river. At one point, in a huge driftwood pile on the side of the river, I spotted the nose of an aluminum canoe that had been swept up in some past deluge. So I may have occasion to hit this stretch again in the near future to see if a salvage operation may be feasible. 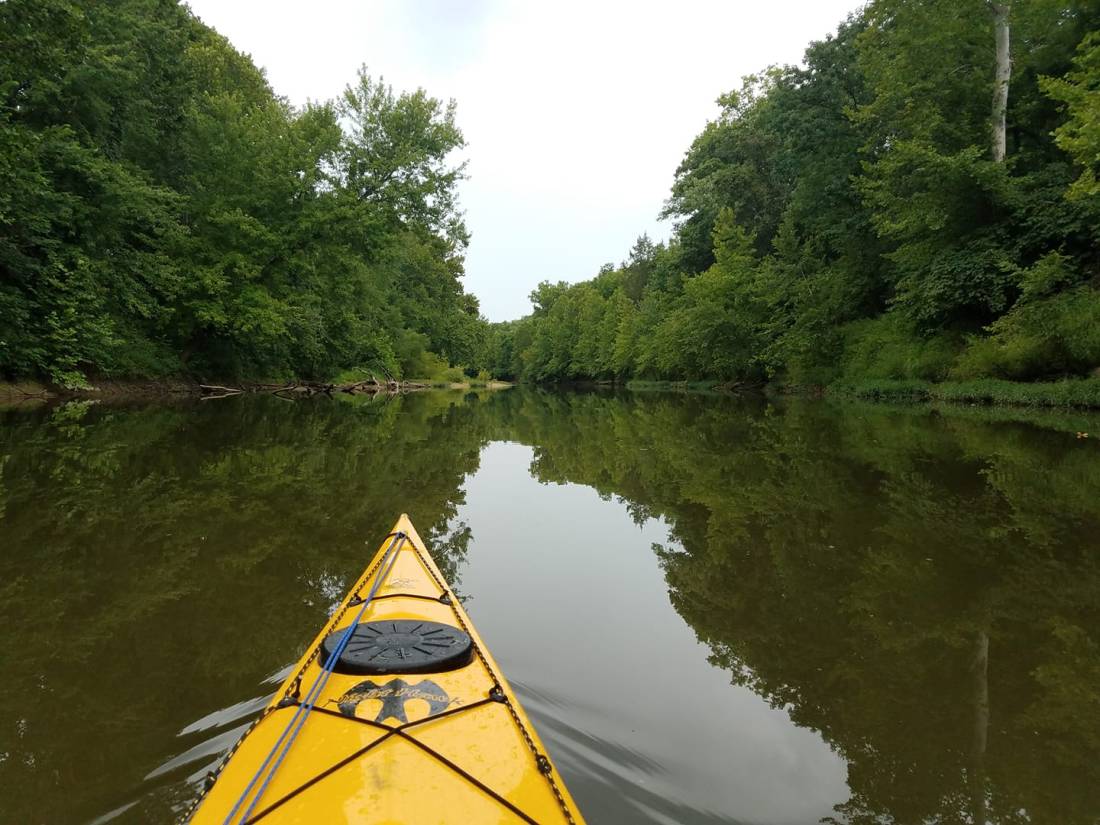