As I finished paddling Montana and entered North Dakota, I noticed very obvious and sometimes instrusive signs of the use of two naturally occuring resources. This post is not (entirely) an opinion piece. I have an obvious bias as an outdoorsman, and aspiring Boatman, and an armchair environmentalist, but I am also a life-long resident of large cities and recognize the importance and need for large-scale farming and gas/oil production. For better or for worse, I consume food products farmed all over the world, and I fill my car with gas so I can drive the 30 minutes to work every day (when I’m not paddling 8 to 10 hours a day, of course). I’m merely trying to educate and show what the impact of these industries is on this quiet but otherwise pristine stretch of the Missouri River.

First, the use of river water for irrigation purposes. From Fort Peck Dam through the border of Montana/North Dakota, I saw dozens of these along the river: 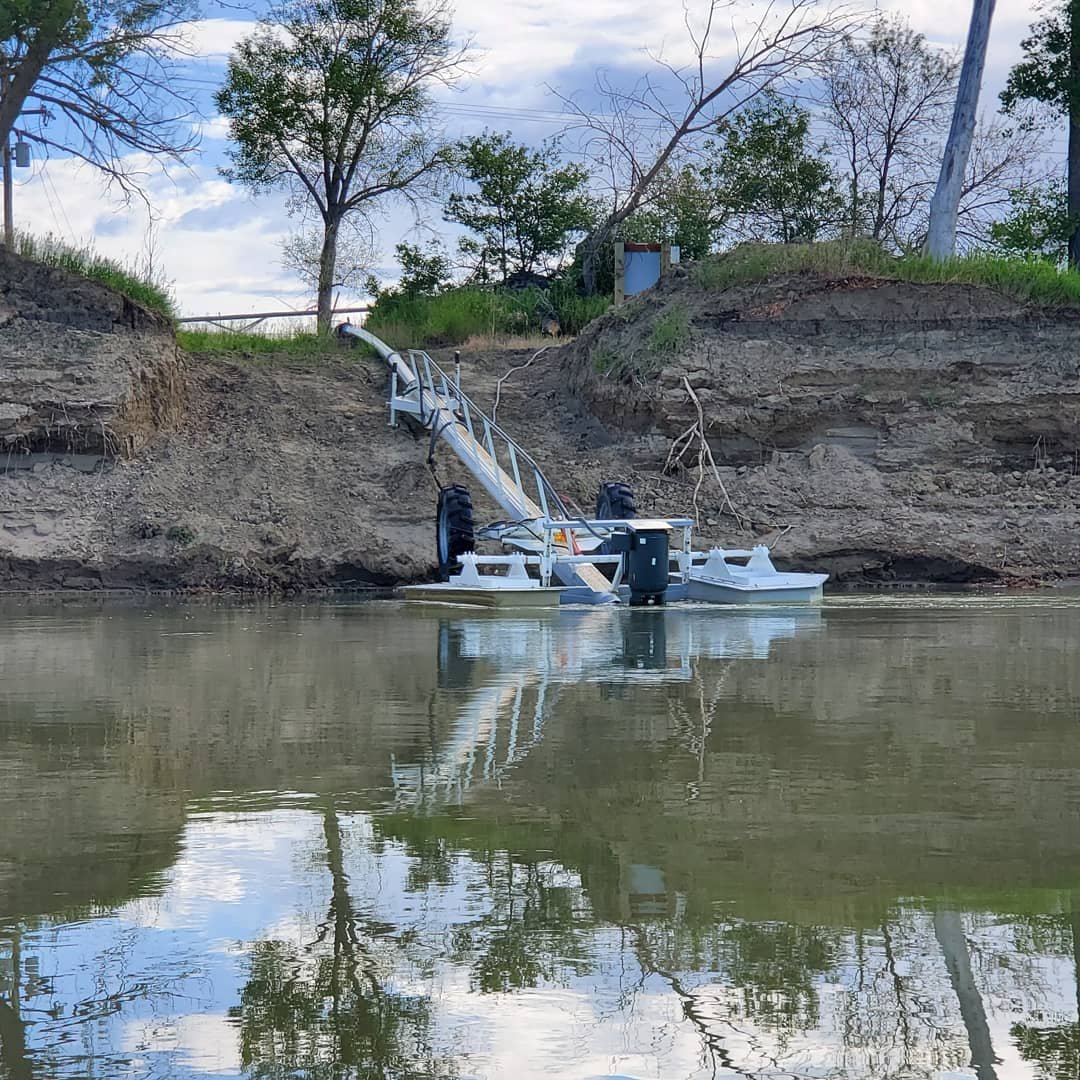 I thought they might have a more technical or industrial name, but when I slowed to talk to a guy who was working on one, he told me they were floating water pumps, obvious enough. Basically, it’s a big tube that pumps water from the river to farmland that otherwise wouldn’t get enough water to support crops. Usually they are hooked up to either a noisy generator or power lines that have been run to the river’s edge to power the movement of the water. When looking for places to camp along the river, I avoided these pumps, as the noise from the generators was loud and didn’t quite provide the ambient sound I desired when I was trying to relax, watch a great sunset or sleep at night.

I also had the fortunate experience to talk to a gentlemen after the 5k run at the Fort Union Rendezvous who worked in the agriculture industry, though wasn’t a farmer himself. I quizzed him on the use of these pumps, so ubiquitous along this stretch. He explained that these were indeed used for irrigation of farm fields. The primary crops grown in Northeastern Montana are corn and…a surpise to me, sugarcane. I’m not an expert by any means, but he confirmed a thought I had that typically sugarcane is a fairly water-intensive crop. I usually think of big sugarcane plantations on islands or along coasts of Caribbean nations. He further explained that typically annual rainfall here is 10 inches, and these types of crops grown here require at least 30. So the shortfall is pumped from the river. Another somewhat alarming fact he told me, was that there is little (i.e. none) regulation as to how many pumps are put into the river and how much water they pump out. If you own land on the river, you can pump as much water as you’d like out of the river.

2019, as all of us have unfortunately seen, has been a historically high water year. From the still snow packed mountains of the Rockies in Montana, to the water-logged prairies of the Dakotas, to the failed dams of Nebraska, to the busted levees and sandbagged main streets of towns up and down the river, there is no shortage of water this year. And most years, the Missouri holds so much water that a few pumps in Montana are but a drop in the literal ocean of river water. And my agricultural industry buddy confirmed the same. There is no thought to the impact of water levels from the irrigation here. But my thought immediately went to the Colorado River. The countless articles, maybe a documentary here or there, explaining that due to overuse and abuse of the water resources of the Colorado River, it no longer even reaches the Sea of Cortez; it runs dry far before that. I am by no means advocating for limiting the use of Missouri River water to irrigate farmland and provide much needed food and resources. I am simply remarking at what seems like a fairly slippery slope of unregulated water usage on the Missouri River, or pretty much any body of water.

Almost immediately upon crossing the eastern border of Montana into North Dakota, I was warmly greeted by this sight:

Then I began seeing the bright flares of something – I assumed the oil or gas, being burned at the site of the pumps or wells. Like this one at the very upstream end of Lake Sakakawea: 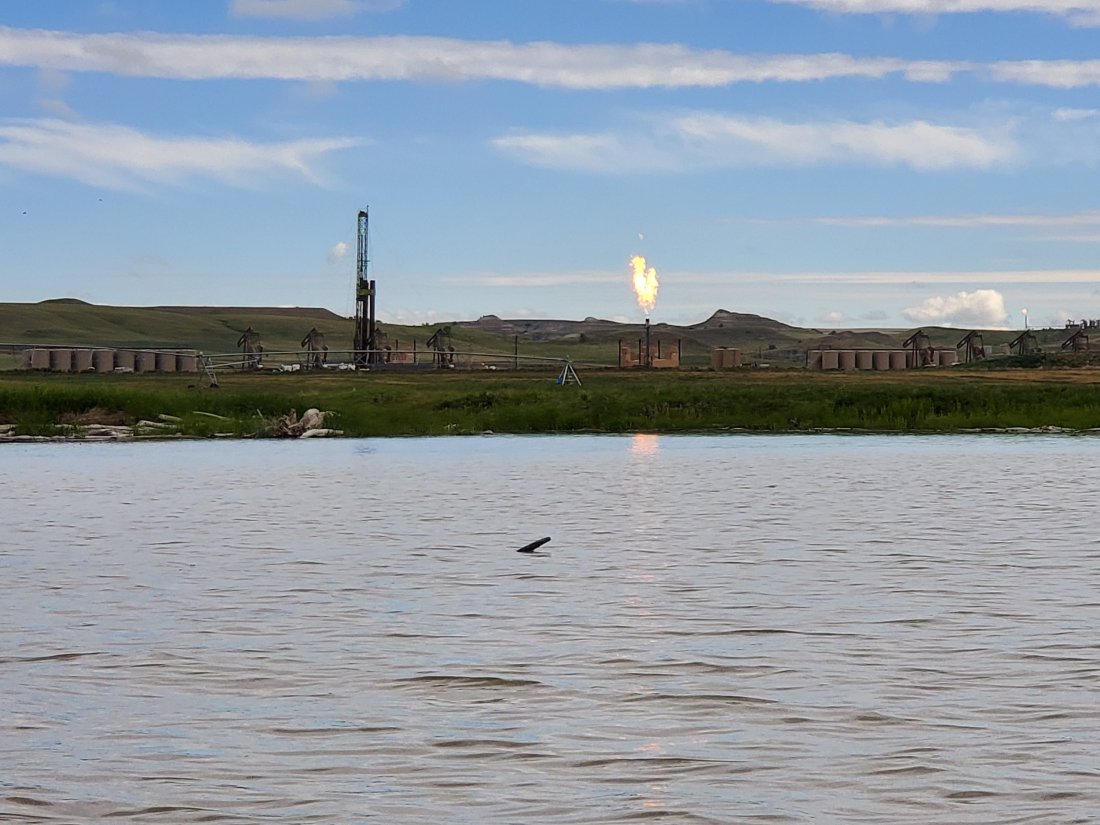 At an amazing spot near Williston, ND, I camped at the edge of the river one evening and enjoyed a full moon coming over the horizon. I was on the phone with my wife and remarked to her how beautiful it was, and how from the door of my tent, I could also count about 8 gas flares in the surrounding hills (if you look closely, they are there):

Again through articles I’ve read, documentaries here and there, I was aware of the oil and fracking industry and how prevalent it is in North Dakota. However, witnessing it in person was bit of a shock at first. As I paddled the first few dozen miles of Lake Sakakawea, I would turn a corner on the lake, see three or four more flares in the distant hills, and joke to myself the Eye of Sauron was still watching me. I was paddling about 50 yards from shore, heard what I though was thunder on a cloudless day, but it was more sustained. I felt actual vibrations coming from the water, through my wooden kayak and into my posterior. I paddled around the next decline in the bluff and saw a massive pumping station or oil well a quarter mile from me. I pulled into the cove of Tobacco Gardens late on a Monday afternoon and noted its peaceful and beautiful surroundings, then once I got on shore, counted 5 active oil sites with flares surrounding it. For the next two days at Tobacco Gardens, I heard the rumble of large trucks coming to pick up the oil on the road behind my cabin. When the sun went down, after I enjoyed the spectacular sunset, I witnessed another show in the sky – only this one went on all night: 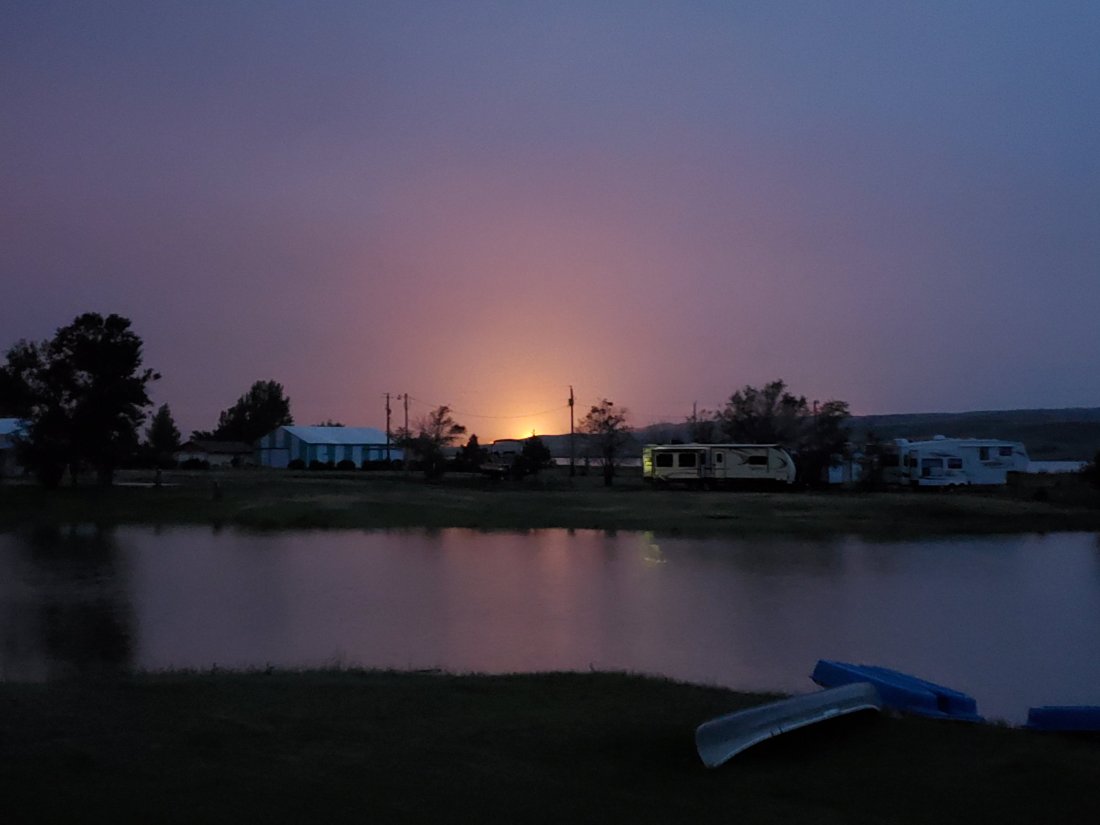 When my friend Dan and I were camped at Four Bears further down the river, we enjoyed some beverages into the late evening hours, then walked to the edge of the peninsula to see this:

At Tobacco Gardens, I had the pleasure of joining the owner Peggy’s daughter Jade and son-in-law Levi for Jade’s birthday dinner. Both Jade and Levi work in the oil industry so I got to ask them some pretty good questions and get their perspective. Obviously, the oil industry and oil boom in North Dakota in the past 10 to 15 years has led to unprecedented growth in the population, income and overall economic strength of the state’s economy and its residents. A lot of Peggy’s business comes from those who are in the area due to working in the industry. Having a well-paying job in the industry allows young people to stay in North Dakota, or incentivizes others to move to North Dakota as well as lead pretty good quality lives. As we rode the wagon train into Watford City, I remarked at the brand new apartment complexes, condos and subdivisions of new homes that wouldn’t look out of place in the growing cities I’ve spent time in – Nashville, Chicago, St. Louis (uh, yeah sure, St. Louis). Peggy confirmed much of the development of tiny Watford City was not there 10 years ago.

A couple other facts I was pretty shocked to learn: the light pollution caused by the flares at night in this region of North Dakota exceeds the light produced by the metropolitan area of Minneapolis! The flares that are burning off gas or oil are mandated by law to only burn 2% of excess oil produced. That means that theoretically, 98% of the oil and gas is captured, the flares represent only the 2% that has to be burned as excess because storage is full until the next truck arrives to move out the inventory. (Some stations are connected to pipelines that spiderweb the state, I witnessed a few pipelines being built.) That’s fairly shocking, because flares were everywhere! They must be producing massive amounts of gas if what I saw being burned off was only 2%. I can’t even begin to imagine the impact the industry here has on climate change, and frankly I’m a bit nautious when I think about it…

I was also fortunate enough to have time to speak to Peggy in pretty good detail about her experience with the industry as a life-long resident, a successful land and business owner who I expect would have pretty strong feelings on the topic. I won’t include everything we discussed, but I’d summarize her views as mixed. Many of her kids and kids’ in-laws work in the industry and lead pretty good lives. She has to constantly deal with the industry through everything from her campers sharing the roads with the oil trucks (including her literally chasing down and reporting speeding drivers – where they pretty much get fired if Peggy reports them), the encroachment onto her or friends’ property, and restrictions being put in place by the Army Corp of Engineers, who manages the Lake and works closely with the oil industry. She is well known by those in the industry as someone who won’t bend to their whims and will put up a fight for what she feels is right, and that gives me great comfort and makes me admire her beyond just being a world-class River Angel.

Riding the wagon train from the outskirts of Watford City to the county fairgrounds provided some good opportunities to capture more of the impact of the industry: 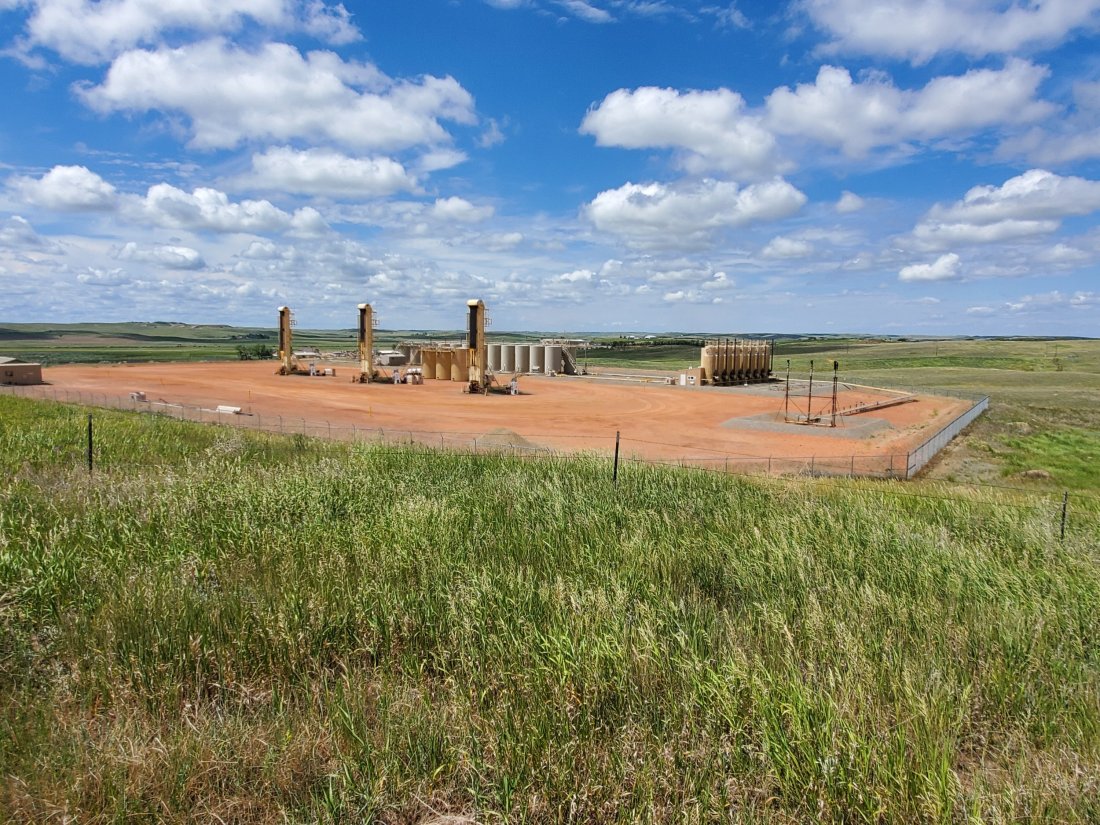 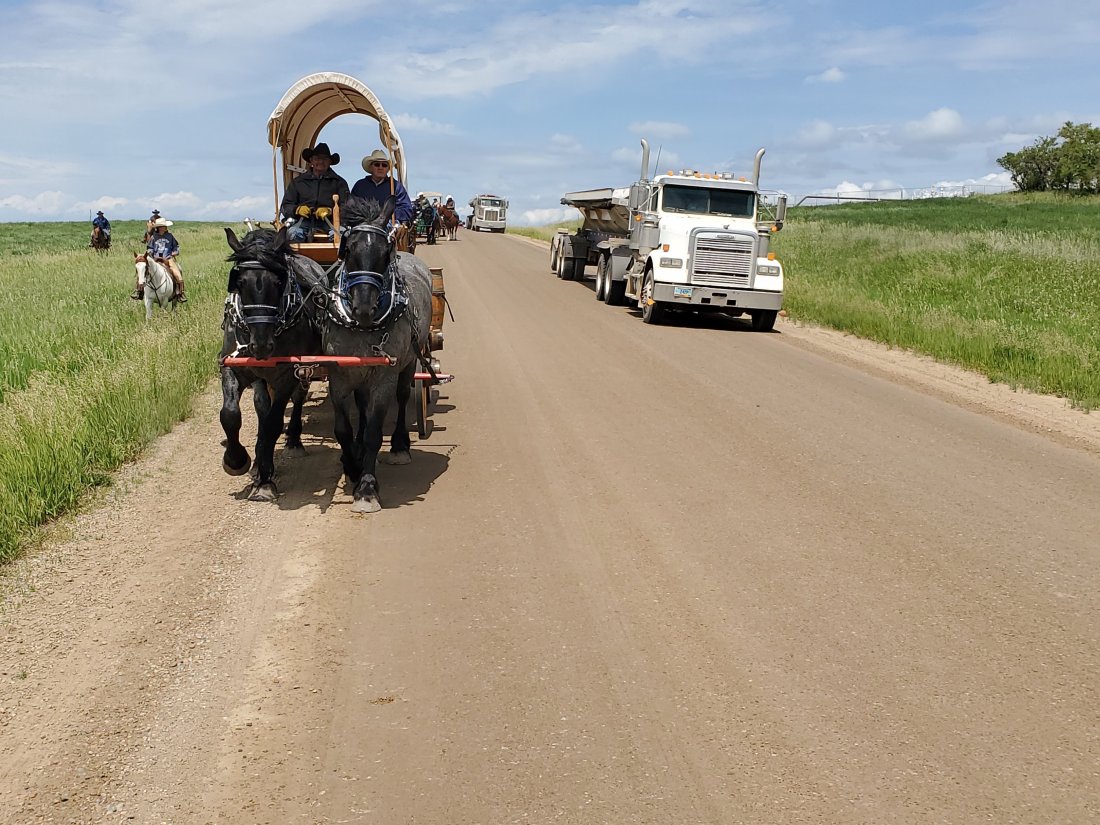 Like I said, I am not in a place to make a definitive determination that these things I’ve seen are positive or negative. I think it very safe to state that there are both positives and negatives to the use of river water for irrigation as well as the mining of minerals and resources from the Earth. We could debate endlessly on which may outweigh the other, but I have many more miles to paddle, more things to learn and endless more experiences to encounter.

P.S. – Within the next week, I will paddle through the upper end of Lake Oahe, where many of you will remember is where the intense and sometimes violent protests of the Dakota Access Pipeline (DAPL) took place within the past couple years. It’s my intent to see where it happened, witness the impact of the pipeline construction or aftermath and hopefully speak to people that were involved or somehow affected by it.