After an evening of cold beers, a great burger and good conversation with fellow camper and proud South Dakotan Russ at the bait shop at West Whitlock State Park, he generously brewed me some fresh coffee back at his camper to fill my thermos to get me started on the right foot the next morning. I awoke to a nice sunny day, but winds from the South. I immediately crossed over to the South side of the lake and for about 8 or 9 miles was able to paddle in the shelter of the shore in fairly calm water. I enjoyed passing under the very long route 212 bridge over the lake. When the lake made its turn South, I was once again paddling into the wind. I made some hard miles before things calmed down later in the afternoon. I passed a boat ramp around 4 but kept going, as I wanted to tackle Little Bend the next day and wanted to get as close as possible that night. I made about 6 or 7 more miles before finding a pretty nice beach in a partially sheltered cove. I had a lovely view of the sunset to the West, even though it was pretty warm and my legs were targets of the biting flies.

There was a bit of wind and rain overnight, but nothing too bad luckily, as I has absolutely no shelter or windbreak on that beach. I packed up my damp gear and was on the water early. Slight winds from the North, mostly at my back for the moment, I crossed from the East to the West side on the approach to Little Bend. At Little Bend, Lake Oahe makes a hard West turn for around 8 miles before doing a complete 180 back to the East for another 8 miles. A massive U-turn that some have actually portaged up and over the thin spit of land at the neck of the turn, but I was there to paddle. I crossed over once again, aiming for the very end of the bend. I encountered strong winds from the North and pretty large waves. I surfed may way across and landed on a beach to collect myself and ensure no leakages from waves crashing over my hatches. A couple more miles and I was out on the end of the bend, with the waters of Lake Oahe for nearly 270 degrees in every direction: 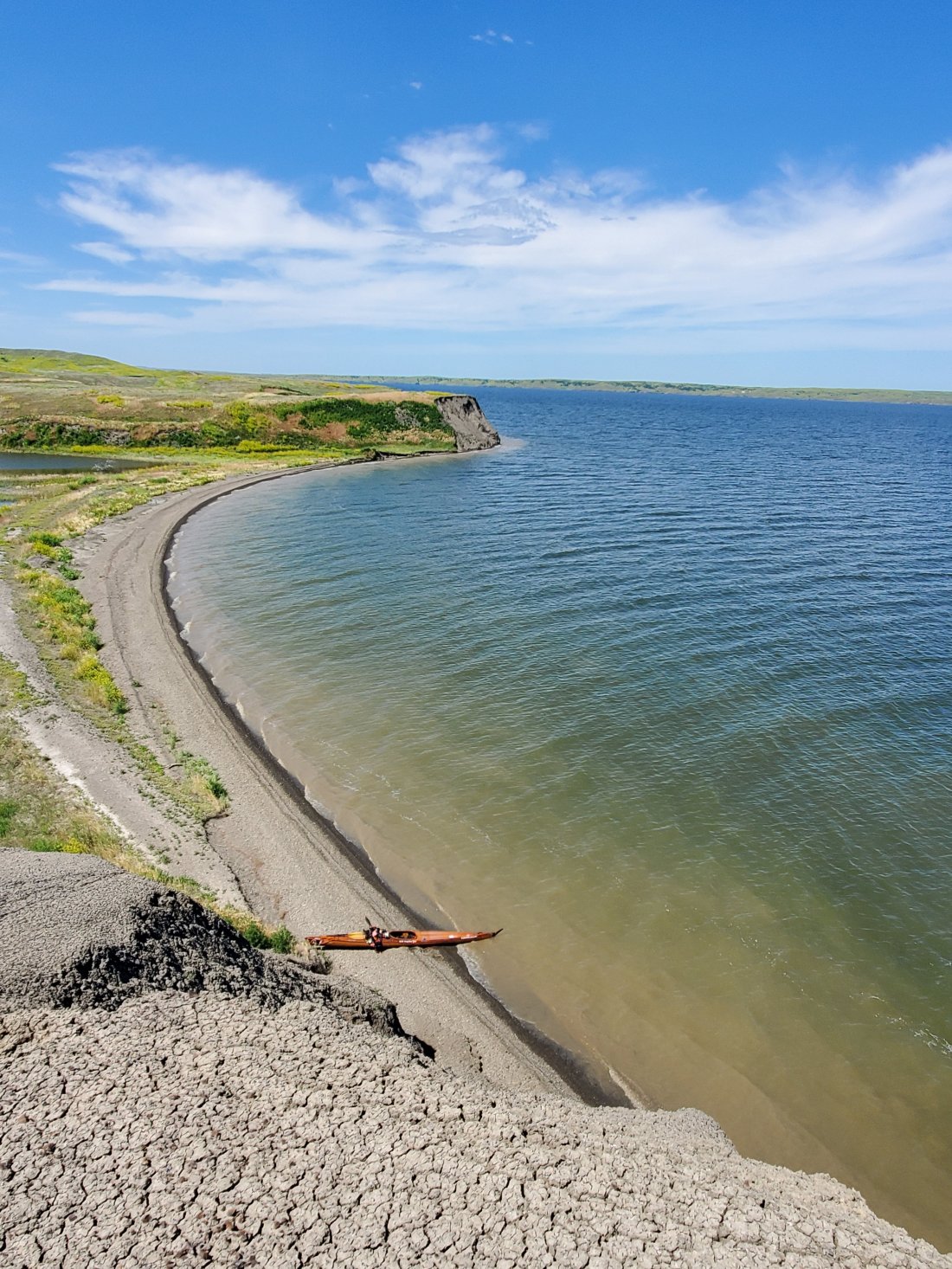 Once around the bend, I was once again sheltered from the wind and paddling in calm water. Sure, the wind is can be tough to paddle in and make for rough waters, but at least it keeps you cool. The Southern end of Little Bend was hot, so I stopped at Little Bend Conservation Area ramp for a quick swim to cool off. I made one last crossing for the day in glassy waters to Pike Haven Resort, where I was given a nice spot to pitch my tent overlooking the lake. I grabbed a shower in the spider-infested shower house, then settled into their nice bar/restaurant for a few cold ones and a nice steak. I emerged from the coolness of the bar just as the sun was setting in order to avoid the evening heat and was greeted with one of the nicest sunsets of my trip so far:

From Pike Haven to the end of Lake Oahe is around 32 or 33 miles. I planned to tackle it in 2 days, stopping about halfway. Pretty quickly after getting out on the water, I saw a distant boat coming towards me. Normally, if I am facing a boat coming my way, they turn off well in advance of any kind of close calls. This boat kept coming, I nervously watched it approach. As it got closer, the driver cut the engines and drifted up to me. Jack Kuhl introduced himself as my host for the end of the lake and Pierre. I had gotten Jack’s contact info early on, and was planning to contact him when I got to the dam, but Jack was able to locate me on the lake via my tracker and decided to come out to see me. After discussing plans to meet, he went off to do some fishing and I continued on with relatively calm conditions. As I approached two resorts that I had contemplated stopping at later in the afternoon, Jack returned. He suggested I paddle on a few more miles to Peoria Flats, where he could load me up on his trailer and drive me 10 minutes to his house where I’d have all the comforts of River Angeldom.

Approaching Peoria Flats, I saw Oahe Dam in the distance. Ensuring the forecast was not expected to be very windy the next day, I decided to leave the last 6 miles of the lake for then. Jack backed his flatbed trailer all the way into the water and I paddled the kayak right up onto it, tied it down, then off we went – by far the easist offloading of my boat so far this trip. Back at the Kuhl residence, I met his wife Sue and cooled off with a beverage and shower followed by an amazing meal of freshly caught Walleye and corn on the cob. Jack had paddled the entire Missouri River in 2015, so we exchanged stories and notes, I think Sue might have been a little bored listening to us go on. But we also talked about our travels, with the Kuhls being pretty wordly travellers themselves.

The next day, Jack dropped me back in the water at Peoria Flats and I paddled the last 6 miles of the lake. There was some wind and waves but not too bad. I also did a Facebook live video during this stretch. While it worked fairly well, I don’t think my reception was super clear, as the video kept dropping. Still, a lot of people joined, said hello and asked me some questions. At the dam, I cruised back onto Jack’s trailer, then we located a nearby rock, under which resided a small stash of keepsakes and treasures left there by previous through-paddlers. I checked out what was there, including some bug spray, a head lamp, a buff, some energy bars, a (sought after) purple hat awarded to those who have paddled the entire river – which I left in the stash. I also found a small baggy into which someone had left a nicely rolled joint, still smelling pretty nice and potent. Alas, the ziplock bags of the stash were no match for mother nature, as water had seeped in to soak everything and make it all pretty nasty. I added a few stickers that I collected along the way on my trip so far, nestled in next to the soggy joint. I also nominated Jack for another summer project: clean up and place the stash in a more weatherproof container, so that perhaps the next paddler coming through could actually enjoy the wonderful generosity of previous paddlers and maybe even a few puffs of the sticky-icky. 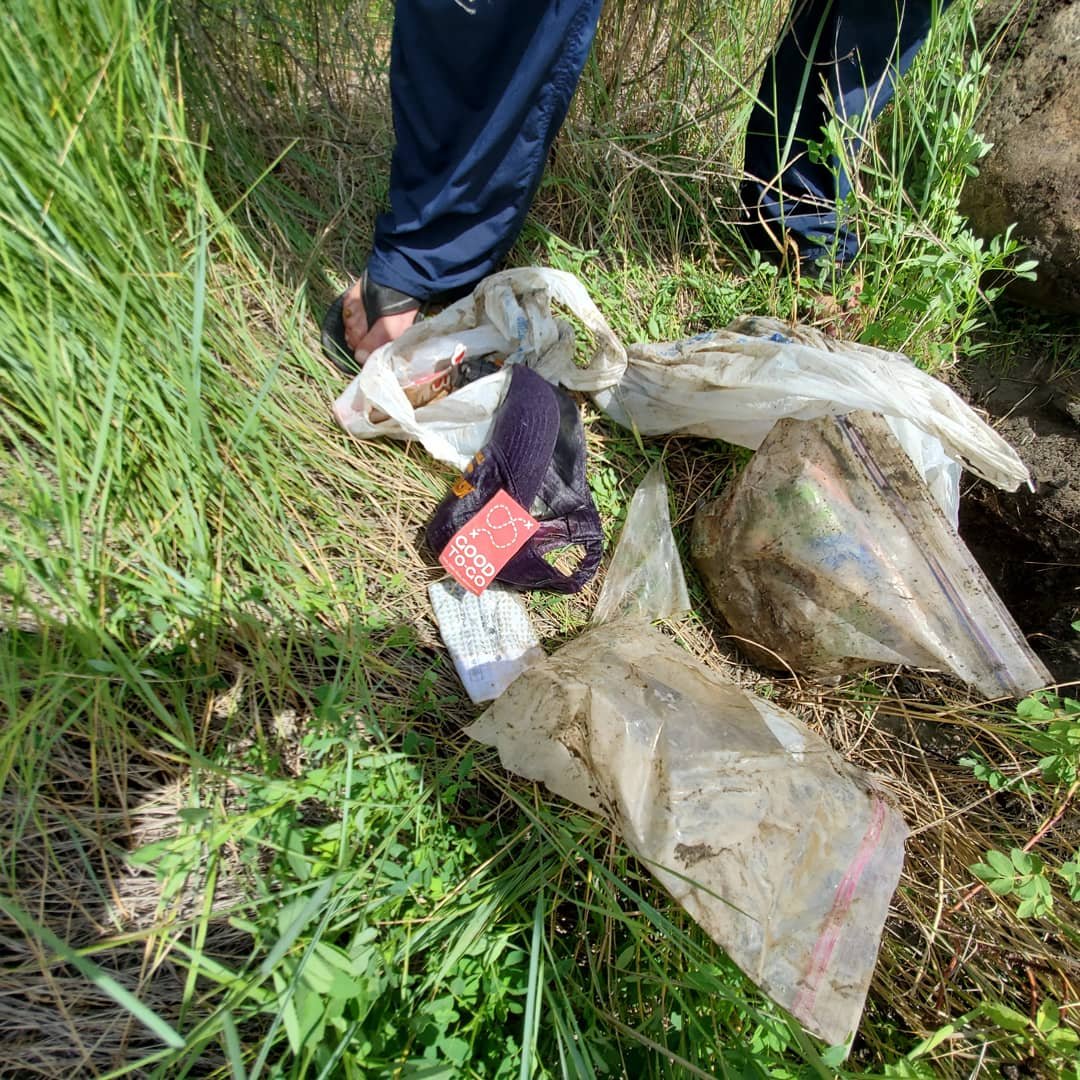 After the short day of paddling, Jack graciously showed me around nearby Pierre, SD, including the site of Fort Pierre, the South Dakota Heritage Museum and the Verendrye site – a big hill overlooking the town where in 1913, a few teenagers discovered an engraved lead plate planted by French explorers way back in 1743. The plate itself is stored in the museum, where they also had a pretty cool exhibit on Minuteman missiles, which have played a big part in the history of the Dakotas. After a quick stop into the local Wal-Mart to load me up with fresh cherries, which have become my preferred snack while paddling, back to the Kuhl residence for another amazing dinner.

The next morning I was loaded back up and ready to begin the next lake – Lake Sharpe. I thanked the Kuhls for their generosity and for being wonderful River Angels.

To summarize Lake Oahe: I spent 10 days paddling this 231 mile long beast of a lake. I took 3 rest days – 2 at Bridge City Marina in Mobridge and 1 at West Whitlock State Park. The reputation of Lake Oahe is that it can be unbelievably rough and dangerous based on the weather conditions. I’ve heard many stories of paddlers being stuck on the shore for days at a time – 10 days in one case. Jim Emanuel had to take shelter in a shower house last year as 100mph winds came through, flattened tents and brought down an electrical pole at the campsite. Folks have been caught out on the water as massive storms appeared almost out of nowhere and stirred things up. My Oahe experience was luckily not as exciting. I consider myself extremely lucky to experience the weather and conditions I did. Other than that one terrifying storm in the middle of the night that I weathered in my sand-covered tent near Cannonball, I didn’t have a ton of overly challening conditions. I was also lucky to have my awesome boat from Timber Longboard Co., which I confidently paddled into (up to) nearly 20mph winds and the waves that were whipped up by them. Peck, Sakakawea, Oahe – the big three lakes on the Missouri. I’ve now completed all of them. I am hoping that within another week of paddling, I will descend past the last dam of the Missouri at Gavin’s Point/Yankton. From there I’ll hit the fastly moving water of the lower Missouri and begin the real home stretch.